Some time ago I spent a a while collecting the wifi network names I saw while on my travels around Brum. It’s an interesting insight into the minds of those who set them up.

In New York for a week and without being able to afford to use 3G on my phone I was sniffing for wifi a lot — and again became obsessed with the names given to the wireless access. I tried not to let it overtake me though, so I only wrote down the good ones. NY’s grid system of streets would facilitate a great psychogeographic experiment of walking the grids and laying the names on a map — but until I get a chance this little snippet will have to do: 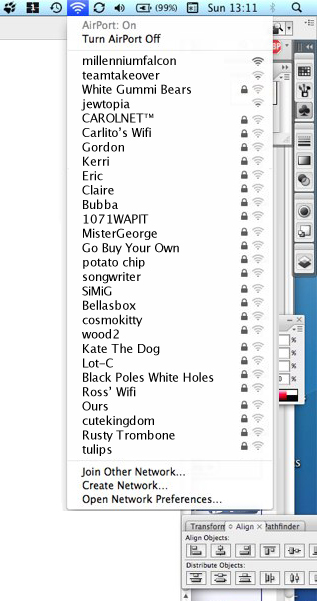 Of course, I’ve mocked this up, but you could at times see this many networks at once — and they were almost all locked.

This entry was written by Jon Bounds, posted on 14 March 2010 at 1:37 pm, filed under art, found stuff and tagged New York, psychogeography, wifi. Bookmark the permalink. Follow any comments here with the RSS feed for this post. Post a comment or leave a trackback: Trackback URL.